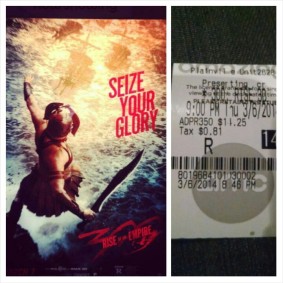 My friends and family can tell you that I had been a bit reluctant and nearly opposed to the idea of 300 getting a sequel. As brilliant as a glorified historical graphic novel of a film as it was, I thought it was just fine on it’s own as a single work of art, not a franchise. Yet almost a decade later we get Rise of an Empire. And here, I will admit, by going in with little to no expectations, I was pleasantly surprised–nay–entertained!

First of all, to call this just a sequel is an affront to this film. I’m still trying to figure out what word to call it other than a “meanwhile…” kind of a story. Perhaps we can call it a companion piece? Certain parts of the film take place the same time 300 does, so it wouldn’t be entirely fair to call it a sequel. However, the film does pick up pretty much where the first left off, like a proper sequel should. Then it whisks us into the past to show us how the evil Persian god-king rose to power and why he has it out for the Greeks.

Our hero (whom I won’t look up how to spell his name due to laziness) for this film is the one at fault. I haven’t pulled out my 8th grade history book to verify but I’m going to assume the film is pretty historically accurate, right down to the Cave of Hermits. Anyway, instead of following the battle thirsty Spartans, we board the ships of the intelligently crafted Athenians led by our Hero I Won’t Spell Out, who’s soldiers aren’t born with 6 pack muscles, but instead rather be home baking breads, writing poetry or anything else besides meeting the business end of a pointed object. But one of the many major consistences this film shares with it’s predecessor is pride of country… or city-state? Patriotism! Where’s that history book… But considering the film is based on real life events, should I even say spoiler alert? I’ll revisit this at the end of my review.* A few other consistent themes shared: father/son relationships, what it means to have honor, absolute power corrupts absolutely, etc. But there’s a good one, but it’s a spoiler.

But you’ve come to see gratuitous violence. CGI blood spraying graphic novelly every which way and in super cool slow motion. And my fellow Indoobians, you get more of the same. And I don’t mean that rhetoric in a bad way either. That special effects and splatter is what made the first one so popular and if any other film tried to do this, we might call it plagiarism. I mean the title is graphically written out like it was dripping blood from a sword. And just a heads up parents, there’s also a sex scene. I feel it’s a bit longer and aggressive than than 300‘s passionate before-battle love make session, but it’s there and you can figure out when it’s about to happen. In other words, this earns it’s hard R rating. Especially with the number of decapitations, the Headless Horseman of Sleepy Hollow would either be proud or mortified (it’d be hard to say without a face to read). But this movie would appeal to men and women alike. If men complained there was too much men flesh, then Eva Green is the answer. Actually, I’d consider this Eva’s movie more than anyone else as she dominates every scene she’s in. Ruthless and sexy. I expect to see women dress up as her this Halloween.

Like I said, I consider this film to be a companion, and with that we run into a few characters we met in 300. Some I would have rather not seen again, let alone get a close up. Others are a welcome face, and you’d know what time the story takes place due to the condition of said face. I don’t know if this has any real memorable lines that might be turned into text message notifications or YouTube parodies but it’s definitely full of BAMFing shots that only films like this could pull off (see: Eva Green). (That’s the closest you’ll ever get me to swearing without actually doing so.) There are also a few dry parts where politics come into play. Again, the first film dealt with this too and it’s important for the audience to know why their sons, brothers, husbands and fathers are losing their lives.

So in short, I was impressed. I came in as a skeptic but I now I’m a believer. Should it be seen in 3D? In my honest opinion… I don’t really think it’s necessary BUT there are quite a few shots that pay off when it comes to beautiful cinematography and the occasional head hurtling towards you. It is in IMAX, and I think if I were to go see it again, I’d see it that way. But I would recommend seeing it in a theater while it’s still fresh. I’d get the Blu-Ray when it comes out and have a 300 marathon shortly thereafter.

*SPOILER ALERT: What, no video? I told people that I’d start doing video reviews but let’s just be happy I’m posting something. That’s not the spoiler, I’m just testing you for those that read past the warning. But again, with this story based on history, if you paid attention in class you know how this story ends. But the following is going to reveal more or less when/where/how it ends… but vaguely…

As I was writing this it occurred to me another similarity this film shares… and that’s it’s use of a narrator. We don’t learn who the narrator is speaking to, or why for that matter, until the very end of 300. In a similar fashion, we get the same narrative technique that sets up a somewhat similar ending. Even though I said “spoiler alert”, I still don’t really want to spoil anything… I just like how true this film stayed to the first one.