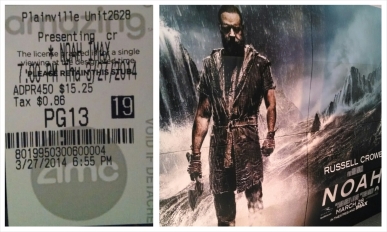 Normally I try to write my film reviews as soon as I get home from the theater, half sleepy, partially hungry, and dreading having to go to work the next morning. I also avoid reading other reviews from more accomplished critics so I don’t feel influenced by their views and opinions and begin to adopt them as my own. Well I broke all those rules I set for myself. The reasons are not important but rest assured, it’s a hilarious story that will never be told.

As for my thoughts and opinions on Noah, I may write a followup to this particular a review. A good old fashion reflection, as I’ve done with LOST and Breaking Bad where I dive in a little deeper on how I experienced the movie or show on a deeper or different level that just mere entertainment. But for now, let’s stay on the surface and discuss why I thought this movie was very good and dare I say it… EPIC. (Where is Kevin Marc?)

After much speculation and controversy, mostly among conservative religious organizations, Darren Aronofsky released his first major studio movie that is an interpretation of the classic tale of Noah’s Ark. The religious folk had been perked up and waiting to either shun or praise since development and I’ve been waiting on the sidelines for their reactions… as well as to see this film. But it’s not really about them, it’s about you, fellow reader, deciding whether or not you should want to see this or not. Chances are your mind is already made up, and to which I say stop reading and go see it already. If you haven’t made up your mind, stop reading and go see it already. Flood the theaters. Drawn in fountain beverages. Wrestle the snack bars for popcorn (and pi if they have any). Swan dive into your seats and await the blackness of the darkened arena to bring you to a far away land, to a simpler land, to a world that’s about encounter the wettest reset button in history.

I realize none of that has been helpful so far, and I left out Requiem for a Dream because I really did not like that movie. In fact, the only Aronofsky movies I guess you can say I tolerated would be The Fountain and Black Swan. However all of them just have a specific Darren flavor that to me is an acquired taste. Those two were the least bitter. And now I can add Noah to the list as my favorite of all his films. I needed to explain my view on the director first because for me, that was my biggest concern. Yes, I was curious how faithful he’d stay to the biblical story, but I was worried he might get weird in the way that would leave a bad taste in your mouth. Fortunately, it tasted nice. I’m approaching this particular review, not so much from a Christian standpoint, but from anyone who is looking for a good story to settle into.

I’ve heard other critics say that if you liked The Fountain, you’d probably like Noah. Except you won’t be as bored or confused. I actually was reminded of The Tree of Life, which in retrospect I can’t say I remember fondly, as I can recall being bored and/or confused. I think I wanted to like it but I couldn’t tell you what it was about. Just a series of the best shots of blades of grass in the sunlight you’ll ever see on film. Yet it did have a creation story and I was surprised to find one in Noah as well. In fact, it was one of my favorite sequences in Noah as it took us through the first “days” of our universe. In other words, this movie, like The Fountain and Tree of Life is very easy on the eyes and great visual stimulation. Remember when we had screen savers? Aside from the scenes of wickedness and bloody mud, great cinematography. Is it too early to start handing out Oscar nods or predictions?

How about the acting? Russell Crowe pulled off a good Noah, I guess. I’d venture to guess that most of us always imagined him to be a frail little old man, since, well, Noah was 600 by the time the floods came. It’s in the Bible. Also in the Bible, Methuselah, played by Anthony Hopkins, and his obsession with berries. Jennifer Connolly… has she does any lighter work? Comedies? But she’s amazing in this as Noah’s supportive and strong and motherly wife. Emma Watson, my future wife, plays Ila… a character that isn’t actually named in the Bible but is Shemps wife. These were one of those instances creative liberties were taken… and I’m okay with that. Noah’s sons all had their traits. I’m not calling them “one dimensional” but Ham was the only one that had anything of a character arc. Lastly there’s the Ray Winstone character which I swear I kept mistaking for Mickey Rourke. He brings in another inaccuracy that rocked my boat a little. Not in the sexy Aaliyah kind of way. More of a “you don’t belong here” kind of way. But again, necessary for the story Aronofsky wanted to tell to give Noah more drama to be concerned with. And he had A LOT to be concerned with.

But Noah had help in the form of the Watchers, who were fallen angels. Their “origin story” was also something highly inventive that I had never seen before. It was a big what-the-stank moment when we first meet them but after a while, you wish you had a Watcher buddy.

I admittedly chose a bad time to write this review, but there’s more I’d like to say about it. One thing that I did read in one article is that this is a movie that may start conversations about who Noah really was and how much of this is true, how much of it is in the Bible, etc. Truth be told, I consulted my Bible when I got home (which also accounts why this was written sooner). But I think it’s worth being talked about whether you’re religious or not. Aside from the amazing feat of getting a menagerie of the animal kingdom in one vessel, the film deals with some importance of human nature and human beings. Fortunately, I don’t think the real message or theme of the film is lost whether you believe in the Bible or not. This film isn’t set out to convert anyone. In fact, Aronofsky is an atheist. But his telling of this story is one that I think all should see.

Should you take your kids? Depends on their age and if they can handle seeing some mildly disturbing images. If your child watches CSI, they might be able to handle this. Maybe. Thematically it does get pretty dark at times. Should you see it in IMAX? Probably. This is being billed as an epic, so go big if you can. Experience the rushing waters and vast environments and lush/barren landscapes. Go for the entertainment, discuss history, religion and truthiness later.