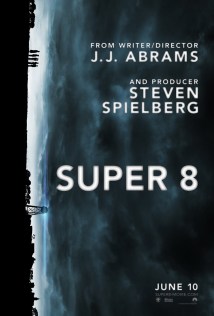 I’m a total JJ Abrams fan… except for his earlier works, like TV shows Alias and beyond only because I haven’t seen them yet. With that said, I was highly anticipating seeing this film from this expert storyteller. Oh, and it was exec produced by the living legend Steven Spielberg. Two heavy hitters when it comes to a stellar summer story.

And what a story it was! A total flashback to what summer movies are all about: action, adventure, wonder, amazement, intrigue, kids in danger and some explosions for good measure. I felt hints of E.T., Jurassic Park, Goonies, the list can go on. But if you’re a fan of those kinds of films, then this is up your alley.

A lot of this movie was kept secret, which only built the mystery and interest for people like myself. But again, knowing Abrams was writing and directing was enough for me to be interested. And I’ll say this much, the less you know about the movie, the better the experience will be. The best thing about the trailers is how little of the plot is revealed. You see things being destroyed and an unknown force taking people away, and the film takes it’s time showing you what’s actually going on. Then, you see what’s really going on.

I’m trying to be as careful as I can talking about the story because I don’t want to spoil it. I feel I need to start writing spoiler editions so I can really go in on the plot and the characters. The title refers to the kind of camera used.

The story is told from the kids point of view, specifically a young boy who lost his mother to an unfortunate factory accident. His distant deputy sheriff father is forced to have more of a presence in his son’s life, but doesn’t seem to understand his son and his interests. Estranged father-figure relationships is a trademark of many of Spielberg’s films, and Abrams is paying homage to him in many other ways. By the way, an Abrams trademark is his use of lens flares which is beautifully littered all over this film.

Anyway, the young boy has an interest in toy models and make-up for film, and is helping his best friend make a film to submit to a film festival. This is yet another throwback to early filmmakers doing what they can do with what they have, like Spielberg and Abrams. So the movie is set around these kids trying to make a movie. Thanks to some shady actions from the government, they may or may not be able to finish what they started. The kids stars did an excellent job. And you need great child actors for a movie like this to work. Elle Fanning, Dakota’s younger sister, did a fine job.

The movie is rated PG-13. There is some mild swearing, so be aware of that parents. They even made use of the one time only F bomb. The film does get kinda violent at times too, so the wee ones might not really like it. I mean, I was on the edge of my seat most of the time knowing something was going to get someone somewhere. You just know “Uh oh… that guy’s a goner… it’s just… a matter… of… OH! There he goes!”

Overall, check this out while it’s still in theaters. Stay for the credits. I’ll probably be buying this when it comes out. And check my on air review for The Lost Dial!