“my dinner with andre” film review

I’ll say this upfront: this is not a movie for everyone. It’s one of those experimental and original films that takes a certain kind of audience to appreciate. Why? Because this movie isn’t just about a conversation, it is a conversation. And a deep one at that. All over a full course meal at an exclusive restaurant.

But let me set up the characters, which are only two: Wallace Shawn (probably most famous for The Princess Bride among many, many other films) and Andre Gregory (I’ll admit I don’t really know him that well, but he’s got a familiar face). They are “playing themselves” when it’s more or less not really about them? I was never really clear on that, but again, that isn’t essentially important. 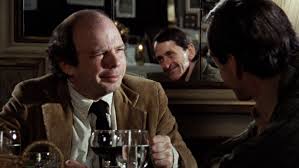 The first half is Andre detailing his life over the past year or so, and how he’s been living his life. I mean, really living his life to the fullest. Wally (as he’s called) is very interested and presses him to continue his story. I, on the other hand, was admittingly losing a little bit of interest even though the conversation was interesting. I was also very sleepy but I insisted on staying awake, especially when they started talking about being awake.

Of course this is “awake” in the existential sense, or just being consciously and socially consciously aware of what’s going on with you and your life. Are you living the life of a robot? Are you going about a daily routine and just surviving versus living? Are you taking the time to enjoy your food? This is what the conversation turns to in the second half of the movie. 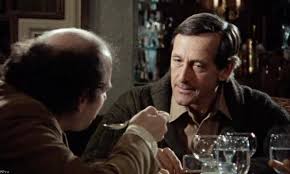 It really dives into how all of us get trapped in our own dreamworld and we stop connecting with other people, including those closest to us, and we just exist. But they even question what it means to just be. When was the last time you sat in a room and just sat there?  Most of us, including me, has to be doing something almost all the time. And it’s actually gotten worse. I kept reminding myself that this movie was made in 1981, but 30 years later it’s still if not more so relevant to 2011. Needless to say, this movie and this conversation is timeless.

This is another one of those movies I can’t give it the proper justice it requires, but at the same time, I don’t imagine a lot of people sticking through to get to the real meaty part of this film. And as I’m writing this, it just now hits me how their meal was a lot like their discussion. They start with wine and eventually a soup… ya know, light hearted things. And as their conversation gets deeper and more serious, they get to the main entrées. 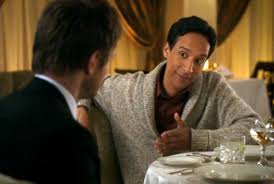 There are a couple reasons why I picked up this movie besides a recommendation from my friend. The under-appreciated show Community did a parody last week that I really enjoyed. However, I didn’t know that’s what they were doing until later in the episode. What most people recognized was the Pulp Fiction references, mostly because that movie is immensely popular. My Dinner With Andre? Probably not so much. I’m hoping that maybe this episode will make people interested. But what I also liked is that the characters talk about having a real conversation, and they make a real connection, which essentially is one of the many points the movie is making.

The other thing that pointed me to this movie was The Big Kahuna, which is another movie about a very in depth conversation. I won’t get into talking about that again, but these are heavy movies that stick with you. I will admit, after viewing this film, I had the urge to just go out, enjoy life, and take some risks. As a matter a fact, I feel like watching the movie again. With that said, it’s a movie I’d add to my collection.