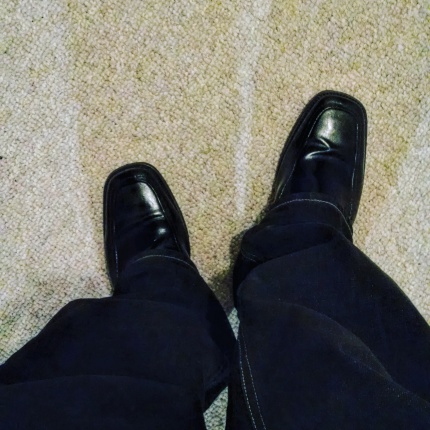 I’m on the cusp of change. Changing from what to what? That’s the question. Those who have kept up with my sporadic blogging have known my career path has been in flux since I had been laid off from the Office some five years ago. This blog was actually born while I was still fresh at that job. But there’s no time to reminisce. Not right now. A little naval gazing? Sure.

These days, I am on the verge of something newer. Something greater. And I’m terrified.

Have you ever had an idea that you just knew was going to work, and it got you super excited that you were ready to explode? Then you told all your friends and loved ones and they told you it was a great idea and it only made you happier and even more excited? But then it hit you… that it’s possible that this idea, should you execute it, will change your life.

I’ve been sitting on an idea for the last few months and I can’t seem to budge. Actually, I’ve been sitting on several ideas but only a few have cemented into daily habits, such as my podcast, regular duties at the church and my finances. But I have other ideas that I would love to share with the world, yet, I’m paralyzed with equal parts fear, intimidation and procrastination. A very deadly and dangerous combination if you’re looking to do great things.

“Fear of success” might be the more accurate terminology for the fear that I have. How do you combat this? Please let me know. I also have fear of failing, but that’s the nature of life. Some of your greatest lessons can only be learned after you make a mistake and correct it. And that close cousin of failure is rejection. It’s an ultimate inevitability. In some circumstances, a necessary evil for growth. Rejections have happened so often I almost come to expect it, and occasionally won’t even bother because I fear it’ll happen. But on that same token, comes a version of endurance. As my father says, “You have to hear 100 no’s before you get that 1 yes.” So I’m hoping I’m at least on #99 by now.

For the last few months, I’ve been struggling with writing a business plan for a podcast production company. I know how to produce podcasts, host, edit, mix and record voice overs for intros and ads. 3SFX itself is a production company that is an extension of my skills as a producer. God has given me a gift and I want to use it to build a career for myself by helping others look and sound great out here on these interwebs.

So what’s stopping me? Me. The hardest part for me is getting started. When I did start writing out my plan, I got intimidated when I saw what other people were doing. I felt out of my league, discouraged and overwhelmed. But I told myself I’d put myself back out there and follow through. It’s not like I don’t know what I’m doing, nor do I have the support. The resources I have at my disposal are immeasurable. I have to remind myself: my time is limited and there are certain things in life I wish to accomplish, and I know the only way I’ll get there is if I take those steps. And I need to take them now. Whatever risks I need to take will be worth the reward. I must do what I’ve always done when I’m afraid: convert that fear into energy that drives me through what scares me. (I have crippling stage fright, but that’s how I do it.)

Aside from the business, I am in the process of writing several different projects. I have a concept for a TV show/miniseries that has already been validated by strangers just on a title sequence I designed. Then I tell them what my show would be about and they are willing to participate in a crowd sourcing campaign. Meanwhile, I have dozens of short stories I have started writing, and some of which I’m writing for the podcast. And there’s just so much going on in the world now. So much creativity, so much passion, and I want what I’m doing to be apart of that.

Alas, my procrastination rears it’s ugly head and I find myself watching time march on by as I wave to it with zero bothers. Then I read, watch or hear about other self starters living out their dreams as I mutter to myself “That coulda been me, but I’m playing.” I set myself on schedules, but if it doesn’t involve interacting with another human, the motivation isn’t exactly present when it comes time to complete the task. And it doesn’t help if I’m sleepy. And do you know what really sucks? The times I really want to be working on these projects are the times I am at work, driving or on the edge of consciousness. So I’ve taken steps lately to put myself in a productive atmosphere. Banishing myself from TV and Twitter. I can always catch up after I finish my projects and post them online.

I don’t know what I am hoping to accomplish by writing this. I think maybe to publicly hold myself accountable. I joke about my procrastinating, but I take no pride in it. I’m still a bit intimidated by the very word “business” itself, but I still must move forward doing it. And I’m not sure what it is exactly I’m afraid of, but I’m swallowing it, using it, and conquering it. God told me that he didn’t give me the spirit of fear, and that I am more than conqueror.

So if you’re reading this, and you know Destiny has been tugging on you, let me know. We may have different callings, but I know I’m not the only one who feels their gears changing. Let’s motivate each other to keep going!