“all of the lights” music video review 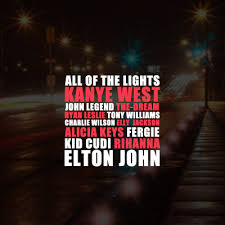 I loved this song the first time I heard it, which happened to be during Kanye’s Runaway short film. Those who follow music much more closely than I do have known about the awesomeness of “All of the Lights” before the rest of the world did thanks to leaks and the like. But I spoke more specifically about the song when I reviewed the album. So as a recap of what I already said: the song it absolutely awesome and if there’s the off-chance I’m rummaging through radio stations and I hear it, I’ll stop to listen to it. It’s one of those songs I’ll listen to in my car, and if I’m a block away from my house, I’ll keep driving until it’s over.

So, like many other songs I love, I tend to either wish or envision a music video. I didn’t exactly have in mind what Kanye did with this song, but I still approve. I’m just glad there’s even a video for this at all. I feel these are one of those songs that’s more about the music than celebrating the celebrity making it. Making music for musician’s sake, if you will. I also feel this is a song that can’t quite be limited to “hip hop” or “rap” because of the way it sounds. All of this is my opinion by the way. But enough of my jibber jabber, let’s watch the video! I guess there is a minor caution to those that may easily suffer from epileptic seizures…

I wasn’t expecting to see all artists involved that contributed to this song, but that would’ve been awesome. I was glad to see their names in shiny blinking lights by the end. I already know Rihanna’s wardrobe might be subject to discussion. As a guy, I’m fine with it. I recently read something somewhere about putting a stop to this “suspenders look” that seems to be trending at award shows and photo shoots. And I may not be a huge fan of her music, but she is nice to look at. Kid Cudi continues the trend of being filmed from behind. And of course there’s Mr. West doing his thing and on top of a police car with all it’s lights… as the song suggests.

I will state that I didn’t need Wikipedia to tell me what inspired this video. (I did use it to keep track if the video had been released, but I first found out via Twitter.) I’ve been aware of this movie Enter the Void for a few months and I have a mild interest in seeing it sooner or later. But what’s been reported so far is that it has the most inventive and interesting title sequences since… I dunno… And if you don’t know by now, I’m a sucker for words in animation or when the typography is the main attraction, as is in this video or the following credits scene for Enter the Void. The film also has been noticed for it’s POV filming style, which is also shown in the music video.

I’ve already wanted to do something like this one day and blatantly copy this very style of blinking in your face style of writing. But this style works very well for Kanye’s music video. In fact, I wish I got to see this on a big screen with full audio… which can be arranged actually.