I heard about this movie back in its filming stages, and to be honest, I was a bit upset. Based on the premise alone, it felt like a movie that was sort of a rip off of Love, Actually, which is a great movie. So great, it inspired me to write my own several-love-stories-intertwined-with-each-other kind of a film that happens to take place on Valentine’s Day. And whadaya know, these suckers beat me to it!

From what I understand, or remember, without doing too much research, I think this movie got mixed to negative reviews. From the start, many people who have seen Love, Actually can see a similarities from a mile away. But I’m not going to pan the movie for it’s likeness to what could be considered a rom-com classic, but I can pan it for some of the acting, writing and predictability that take place in this film.

The first offensive that I heard many people cry about is the singer Taylor Swift. I’d like to give her credit for being a decent comedic actor for her stint as host to SNL, but I have to be honest, I never watched that episode. And if more honesty is shed, I would guess she wouldn’t be as well known if it wasn’t for the whole Kanye “I’mma let you finish” West. By all means, I’m sure she would’ve found the center stage spotlight on her own, but what’s done is done and I’ve already spent more time than I wanted to discussing her, than the role she actually played in this movie. The role is simple enough, a simple ditzy airhead blonde who is “in love” with her boyfriend who is also named Taylor in real life. That shouldn’t be too hard to play, right? But honestly, I’ve seen this role played better. And I know they plot in the story was played mostly for laughs, it came out as too flat for me and I wouldn’t have complained if their scenes were cut out of the film completely. 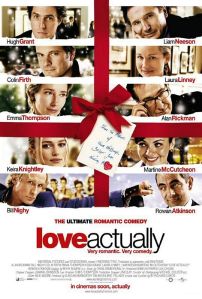 Why I feel Love, Actually is superior is due to the depth in character and they way these characters were written. So in contrast, that’s what I feel is missing in Valentine’s Day. Sure, I might be able to relate to these characters, but there was still a sense of believability that lacked. It’s as if this was a movie for a handful of movie stars phoning in their parts. I had to roll my eyes with the airport scene. Again, Love, Actually has been my favorite so far. On a similar note, Love also dealt with the agony of a little boy’s love… and wanting to catch the attention of the apple of his eye. They tried to play it up so you weren’t too sure of whom he was after, but it didn’t take long to figure out his intention and how it would result. Spoiler alert: I guess he had a happy ending.

But since I can’t recall any specific offenses than that, I’ll talk about what I liked.

Unfortunately, I don’t want to spoil it, but I will say I was surprised with the Julia Roberts and Bradley Cooper’s endings. Pleasantly surprised with Julia, and “didn’t see that coming” with Bradley. And that’s a good thing, please keep me guessing. Unlike Ashton, Jessica Alba and Jennifer Garner… Although I wasn’t sure what really was going to happen with Jessica and then… well… that story was resolved.

My friend complained about big stars being named but only showing up for like two minutes… like Queen Latifa. She had a good role, probably would’ve liked to have seen more of her. George Lopez was amusing. The great Shirley McClain was underused, in my opinion.

The high school lovers attempting to “do it” for the first time gave me a good laugh. It was predictable, but in a good way. Meaning, you knew what was going to happen, but then it got funnier after it actually happened.

I enjoyed Anne Hathaway’s performance probably the most. She seemed the most original, but since I’ve been on a “compare it to Love, Actually” kick, I would say she takes the place of the sex-scene stand-ins. Why? Hathaway is an adult phone entertainer, which almost gets her in trouble with her boss (Queen Latifa) but pays off in the end. Her romantic interest is Topher Grace who plays awkward pretty well.

I suppose you can call the climatic scene one of the biggest downers in the film. Most of these characters failing at love (and a chunk of them end up at an Anti-Valentine’s Day party) and having a majorly depressing pity party. This certainly sets the mood for those lovely couples who went to see this movie when it came out. But fortunately, the movie picked it back up and gave everyone what or who they deserved.

I understand that a movie of this caliber only has enough time to develop so many characters and resolve so many plotlines, but for the sake of a good movie, sometimes less is more. I do not hate this movie. But it’s not a movie I would want to own. Not now anyway. Maybe it will grow on me and I can look past the things that bother me and I can see it as its own movie versus a rip off of another movie. And to be fair, it isn’t. If anything, it was inspired by it, as was I when I was getting my concept together. So overall, it’s not a bad movie. It is a romantic comedy for those who like romantic comedies, so rent it first. Don’t set your expectations too high and you shouldn’t be too disappointed.

UPDATE!!!!
I failed to include my extreme like, or maybe even love, that this movie included Joss Stone’s “4 and 20 Hours” which did enhance the scene during which it was played. I want to again repeat, I didn’t think this was a bad movie, just not as great as I thought it might be and not one I would care to add to my collection. Here’s hoping New Year’s Eve is better.