chief vs the stink bug 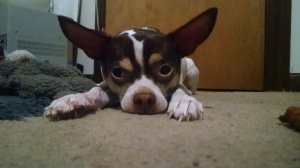 Normally, Monday through Friday, I’m the first to wake up. And by “wake up” I mean actually emerge from my bed to start the day. Chief, on the other hand, always seems to be awake. Or the very least, alert. He may not move from his slumber position, but he’ll open his big brown eyes to see every little move I make and whether or not I open my bedroom door to alert the “start of the day.” And even then, it might be a false start as he knows I take advantage of indoor plumbing and will return to my own slumber position moments later.

Every Monday through Friday it’s always the same thing. Buzzing alarms from 4:05 am until the latest 6 am. Each time I hit snooze on one of two alarms I’m mentally preparing for whatever the day might bring to me. I’d be lying if I said I was overjoyed with delight during this process. What makes it worse is whenever I’m coming out of a dream-state and I’m thinking these deranged disruptive noises are terrorists robots attacking my TV and it takes me a while to figure out that those don’t exist (yet). Chief remains in slumber mode, watching me fight noise devices until they silence for approximately 15 minutes. Normally he waits until I am ready to leave my room for the day, then he casually stretches his way out of his bed, staring up at me, yawning, then sneezing after I apply a spritz of cologne. He’ll watch as I put on my hoodie, knowing that’s my final step before emerging into the real world and he’ll sit and stare at the door waiting for me to open it so he can bolt down the hallway, down the stairs, around the corner, through the dining room and kitchen, and wait by the back door so I can open that door to his relief.

That’s normally how it goes, except for this morning. Chief was first to wake up. I was pleasantly not being terrorized by nightmare robots, but instead being plagued by restful relaxing sleep fairies, killing me softly with pillow dreams of happiness and peace. Until I hear little yelps. I never considered myself a light sleeper, but everyone considers Chief as my child and I hear his cries of despair. I open my eyes to see two big brown eyes staring back at me, head bobbing as his tail fans invisible fires behind him. He half-barks again, just to make sure he has my attention, and that I’m awake.

When I adopted Chief, he seemed to already be house broken and gets agitated when he needs to go outside. If he can’t wait any longer, he pees in shame. I’ve watched him do it. Even if I act like I don’t, he feels he’s committed the worst crime and exiles himself to his cage. With that said, he’s on a schedule. If he feels he needs to go a little sooner than his designated time, he’ll let me know. Actually, his pleas and whimpers either mean one of three things: 1) “I have to pee”, 2) “I have to eat” or 3) “Everyone is in comfy chairs, can I either sit on your lap or can you drag my bed in here?”

This morning I assumed it was option 1. The problem was, it was 3:30 am. I took him out the night before sometime after 10 pm. He’s good for at least 12 hours. (I discovered this too late one Saturday morning.) “What do you want?” I think to ask him. I do talk to him. He understands me. But it’s 3:30 am. And his beady big eyes in his tiny apple head, giving me that look like he wants play with my face.

I don’t leave much to chance. I quickly assess the situation even what feels to be like a drunken state, and wobble to open my bedroom door. Chief dashes down the hallway like I just threw his squeaky toy. I’m too tired to call after him, and like a parent I tell him to stop running. He’s already down the stairs, there’s no point. We meet in the kitchen, he jumping and prancing–still, like I have a toy–but this is just to confirm that it’s time to go outside. I open the door, and he’s free to do his duty and returns a few moments later. We return to the room, it’s 3:45, I go back to sleep.

My alarm goes off 20 minutes later. Chief is already sitting there, staring at me, tail wagging. I will admit, things get a little fuzzy at this point as I had just reunited with those lovely fairies. What’s odd is how active Chief is so early in the morning. Then I happen to look on my TV and see something on the corner of the screen. I flip on the light, it’s what my mom repulsively calls an “armor bug.” Wikipedia officially calls them stink bugs. Shield bug also applies. Why? Have you ever killed one? Even if you don’t they can emit an odor, based on what I read about them. Wikipedia is full of terror

I’m still high from sleep dust, so for a good 30 seconds I’m staring at the stink bug, which is probably staring at me, staring at it. Chief stares at both. My alarm is still going off. I evaluate my options:
All of my bug-killing footwear are in the kitchen…
I have no known stink bug killing or immobilizing sprays or liquids…
I have no trapping containers…
PLUS it’s still perched on the TV screen that I managed for the year I’ve had it not to get a single fingerprint on.

I’m sleepy and careless, I grab a business card and throw it at the bug. And I hit it! But I also lose it in the dark crevice between the TV stand and adjacent desk. Oh great… oh well. For a moment I consider it a draw, we’ll fight another day as I turn off the light and suddenly hear the buzzing and whirling of a Kamikaze fighter. I flip the light back on just in time to see it disappear again. Chief is pawing at the door now, wanting to leave. Just as I’m about to belittle my furry son for his cowardice, I feel the flighty flaps to a flutter of tiny ungodly wings on my arm. My skin probably left my body but I’m not really sure how I got back to my bed but alas there I was and there I also saw, swirling around my bedroom light, the stink bug!

Chief looks confused, as am I, and I witness the stink bug making a dive bomb attack. Somewhere in the tiny commotion Chief leaps into bed with me and seeks comfort. Let it be stated, Chief is not a great guard dog. He is, however, an excellent alert dog and will warn me when the neighbors come home but NOT when a package arrives. He’ll bark at the door if someone is trying to get in then will immediately run behind me. He occasionally poops when he’s really scared. Who doesn’t? Anyway, the stink bug has landed on the bed beside me and Chief. No poops. Chief, still not a fan, does not dare get any closer and retreats from my lap, back to the door. I grab a piece of paper that I hope I will no longer need and capture and crush the invader, and discard it as quickly as possible. Perhaps I killed it quick enough that no stench reached my nose, but Chief was still pawing at the door. Perhaps he wasn’t really finished with business the first time? I let him out, he runs to meet me downstairs.

I didn’t think about it until much later in the day, after coming home from work, that maybe Chief wasn’t necessarily afraid of the stink bug, but was trying to get away from the stink, considering dogs’ super sense of smell that is. I mean, that’s why they call them stink bugs after all. Even if we humans don’t smell them right away, it must be so bad for our canine friends that they need to excuse themselves from the room. Perhaps the 3:30 am call was the first sign of the stink bug. It had more than likely been pestering him to wake him in the first place. In any event, I’m grateful Chief didn’t leave a liquid or solid stink for me to deal with later.