is INTERSTERLLAR out of this world or grounded? [film review] 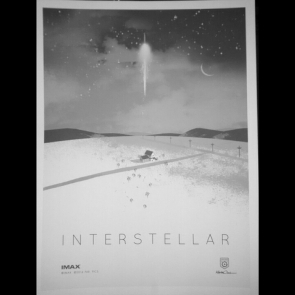 Last night I got to check out what one of my favorite directors has been up to. Apparently, he had been up in space crafting yet another masterpiece following his wildly successful Dark Knight trilogy and slew of other films like Inception and The Prestige. But one of many questions one might be wondering is “how does this film rank with his previous ones?” Honestly, I don’t know who would be asking that questions because if you don’t know what you’re in for by now when you walk into a Nolan film, then you’ve never seen any of his movies.

I say all of that to say Christopher Nolan, for me at least, has done it yet again. While I recorded my “snap judgement” for a soon to be released podcast episode, I have nothing but praise for Interstellar. Granted, I’m already a little biased as I list Inception as one of my top favorite movies and Nolan can do no wrong in my book. But why is this film so good?

To keep this review short, I’m going to say that this is another film to be experienced, like a previous spaced adventure Gravity. It’s important I throw that comparison out there now because due to that movie, I have a healthy fear of space travel, more so than I already did. However, a more correct comparison would be 2001: A Space Oddessy, as that was inspiration for Nolan for this film. And if you’ve seen that film, you’ll be able to see the parallels when they happen. Will TARS the robot pull a HAL-9000? Watch and find out! Another comparison is the third act, which I’d have to explain the plot in order to explain what happens, and I prefer to keep this review short and spoiler-free so I won’t be doing that. But again, in 2001, things get weird in the last chunk of the movie. The same can be said in Interstellar. What other critics have a problem with, I can’t be too sure. One thing I’m most pleased with is how everything that happens early on in the film does pay off later.

I say that because this movie is close to 3 hours. I can attest the last hour breezes by once you get through the first 2. That’s not to say it’s boring, because it isn’t. But if you aren’t a fan of science and space than maybe this movie isn’t for you. There’s some quantum theory speak and even some existentialism that goes on for a few scenes, but like I said, everything pays off if you’re paying attention. Even if you aren’t, the visuals are stunning. And the sound mix: hold on to your seats.

I will take a moment to note that yes, there might be a technical error depending on your screening where the score and sound effects drowned out the dialogue. Aside from that, the bass and booms were meant to rock you seats. And finally, here’s another space movie that respects noises in space. Gravity did it too.

Top notch acting accolades all around. McConaughey cries a lot. And a lot of the times, I almost wanted to cry with him. The central thread of this story, if you will, is the love between a father and daughter. She resents him for taking on this space mission without knowing when or even if he’d ever return. Why is he going into space? Out by Saturn is a wormhole to another galaxy that might have a more hospitable planet that can harbor human life as Earth has run out of food and is basically becoming the Dust Bowl: Reloaded. But what they find through the wormhole is where I stop talking. Yeah, you see things in the trailers but I can’t explain that without spoilers. And speaking of spoilers? Avoid the IMDb page like I did, as I was surprised to see some actors pop up I wasn’t expecting. Wes Bentley, most recently seen as Mordrake on American Horror Story makes his appearance, yes with his beard, no second face was visible.

So, go see this film. I wouldn’t take the kids unless they have an interest in space (like wee Sterling did) or like science and nerdy things like it. OR if they are interested in great filmmaking and storytelling. To me, if I were a child and watched this, I wouldn’t really know what was going on but would remember it when I got older and would appreciate re-watching it then. What I’m saying is, it’s a movie about family, but not really a family movie. Not for the little kiddies, as they’d be bored of their mind. Teenagers and up, buy a ticket. And Academy voters, please nominate Christopher Nolan already. Thank you, and let us not go gently into that night. (I know, I misquoted)